Living systems are made up of many different types of molecular entities, and accordingly there are different types of networks. One of the most important types of networks exists at the layer of “gene regulation”, which controls what set of genes get expressed at any point in time and space. Our work has focussed primarily on understanding the transcriptional layer of gene regulation. Here are some research directions that we are pursuing or wish to pursue:

Inference of structure and function of regulatory networks 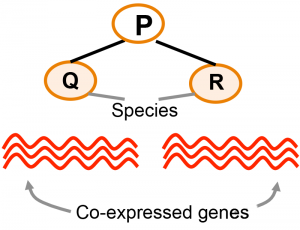 Expression modules are sets of genes that have similar expression profiles under a given condition, often because the genes are regulated by the same set of regulatory factors. While identifying such modules in a single species is a well-understood problem, doing so across multiple species is still in its infancy. However, this is important, because changes in gene expression are likely to play a major role in the evolution of complex behavior of organisms. We are interested in developing algorithms to identify such modules across species.

Learning causal networks describing tissue and disease-specificity.Learning high-resolution networks, that is networks where edges represent physical interactions, rather than functional interactions among nodes. Such networks include entities of many different types, some of which we cannot directly (protein and metabolite expression) requiring hidden variable inference algorithms.

Learning networks of condition-specific responses, where a condition represents a global variable for a biological system (cell, tissue, organism) and affects the behavior of the system as a whole.